The theme of the competition was “Science in Crisis”. All challenges tested the participants’ ability to apply their scientific knowledge to innovate and solve different problems. The competition’s main events were “Murder Mystery”, “Off-land Rescue”, “Escape System” and “Alpha Design Challenge”.

The Murder Mystery event was an ice-breaking session where participants from the different teams were shuffled to make five mixed-teams. Participants had to apply their forensic skills in order to answer three important questions of the investigation – where, when and who. The event was largely based on biochemistry and required participants to examine five different soil samples to determine the location of the crime. Hydrochloric Acid of a certain pH was also provided so that participants could calculate the time of death. Lastly, participants were given a blood sample so they could decipher who the murderer was.

The Off-land Rescue event was the first event of the second day and required participants to create a water boat that travelled 5 metres to a certain destination. These boats could be designed based on three different propulsion systems of which the participants had to choose one. An order form was created, and a budget was allocated so that the teams would be aware of the economic viability of their solution. The teams had to race their boat in the school’s swimming pool and were marked based on the distance they covered and the time they took.

The Escape System event was a simulation of an evacuation-based city planning problem where participants had to create a system by which residents could escape a city in case of a contingency. A series of tracks were used to create multiple entry and exit points so that the residents could be isolated from the contingencies.

The Alpha Design Challenge was a presentation-based event where participants were given 5 scenarios and they had to come up with a solution to a problem encountered in one of these scenarios. The teams were marked on the feasibility, portability, efficiency and creativity of their solutions or devices.

After two days of intense and rigorous activities, the competition concluded with all teams leaving the campus with something new that they had learnt through the events. 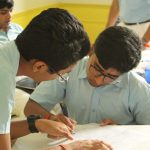 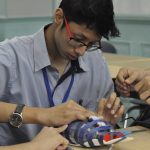 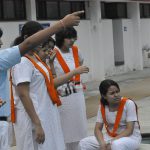