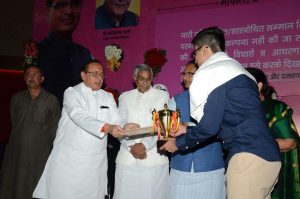 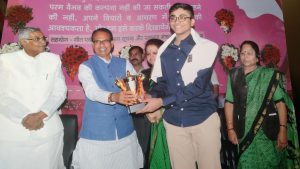 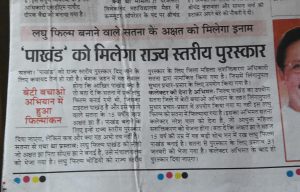 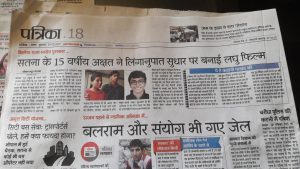 Akshat Jha, currently studying in class 11 at The Doon School, Dehradun, made a short film, ‘Paakhand’, to depict the deteriorating sex ratio in India. His film was selected by the Madhya Pradesh government for a state level award. He was honoured by the Chief Minister of Madhya Pradesh, Mr. Shivraj Singh Chouhan, on  International Women’s day (8th March 2017).

Paakhand aims to spread awareness about female foeticide and sex determination which is being practiced in many parts of India. The film has been named Paakhand as it showcases the hypocrisy prevalent in Indian society. On the one hand, we worship goddesses and on the other, we kill baby girls before they are even born.

The story revolves around a village woman, Bindiya, who recalls her struggle to give birth to her baby girl, Khushi. Her struggle starts when the sex of the child is revealed to the family through illegal procedures. She stands against the patriarchal mindset of her husband and his family. The film ends on a positive note where Bindiya succeeds in her battle against hypocrisy, and opens hundreds of eyes

The film delivers a strong message of gender equality and makes us aware of the importance of a girl in the world. Akshat’s film was a part of his 3-month film making course in the Asian Academy Of Film & Television, Noida. He aspires to become a film maker and wishes to portray his thoughts through visual story-telling.