The Doon School Founders Day Programme began ​on Thursday, October 12th. The programme kicked off with the school’s Founders Day Hindi Production titled ‘Kal College Band Rahega’. A student run production, the play was directed by School Captain, Divij Mallick and produced by Shikhar Trivedi. Their efforts were backed by the stalwart Dr. Hammad Farooqi. The play saw sterling performances from Shikhar Trivedi, Divij Mallick, Mihir Gupta and Akshat Jha. Centred around the themes of love, suicide and social pressure, the play the problems existing in modern day society. The play received a standing ovation from the crowd and was appreciated by all. The play marked the end of the first day of the Founders Programme, which is set to unfold over the next two days, finishing on Saturday, October 14. Dr. Rama Chandra Guha ​was the chief guest for this year’s celebrations.

The second day of the Doon School Founders Programme began with a book signing event with the Chief Guest for the event, Ramachandra Guha. An acclaimed writer, Mr Guha, an Old Boy of the School, talked to boys about his work and signed copies of his books. Simultaneously the school’s science department put up the annual exhibition. The school saw exhibits in the fields of Physics, Chemistry, Biology and IT. These exhibitions featured models of human organs, model experiments and other innovative ideas such as augmented reality. The IT exhibition also designed an app for the event, giving all guests updates on the events happening within the school andalsohelped them navigate the campus. The school also put up a social service exhibit, showcasing all the social work the school does. Further, the art exhibition was also put up, showcasing all the artistic work that had been done by the boys over the course of the year. The Doon School Boys also played a cricket match with the Old Boys team, competing for the R.L. Holdsworth trophy. The current boys of the School batted first and set a target of 144 in 25 overs for the Old Boys. The Old Boys fell short of the target and the current boys won the match. In the afternoon, a debate was organised between the senior-most batch (batch of 2018) within School and the Batch of 1992.

The topic of debate was: ‘This house believes in Seniority.’​  The debate was very close, with the current batch, side proposition, beating the batch of 1992.

In the evening, the main Founders Play, the English production was put up. The play is titled, ‘The Play that Goes Wrong’. The play saw excellent acting from Archit Barthwal, Bharat Chaudhary and Siddhant Shyam. It ​was very well received and marked the end of the second day of Founders.

The third day of the Doon School Founders Programme began with the Pagal Gymkhana organised by Tata House. An annual event the Gymkhana had several stalls and served to entertain all with fun games and excellent food. It also saw great dance and music performances by the students. The Gymkhana was followed by an interaction between the students and the Chief Guest, Ramachandra Guha. The students asked the Chief Guest questions about his life as a writer and also as an academic and intellectual living in India. This was followed by a picture of the staff and the entire SC form batch with the Chief Guest. The day ended with speeches from the Chief Guest, the Headmaster and the new chairman of the Board of Governors of the School, Mr. Sunil Munjal. The speeches were given in the Rose Bowl, in the presence of the Board of Governors, parents and all other members of the Doon School community. Mr. Munjal addressed talked about how as a school it is imperative that Doon embraces the changes that have occurred in the world. He thanked the outgoing chairman, Mr. Gautam Thapar for all his work and highlighted his vision for the School. He talked about what the Doon School means to him and what it stands for, one that aims to provide, as the first headmaster of the School said, an aristocracy of service. The Chief Guest’s speech revolved around his experience in School and his outlook of India as it stands today. He talked about he three pillars of Indian society: diversity, social depth and democracy. He lastly, talked about how school has improved since he was here and the changes he wants to see in school later. The Headmaster’s speech revolved around the changes that had been implemented in School. Talking about the change in curriculum, the establishment of new classes and the implementation of a new schedule, the headmaster outlined what the School has done to become better. The School Captain, Divij Mallick, talked about how the Dosco community has become a family for him and how it has shaped him. 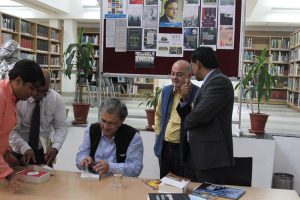 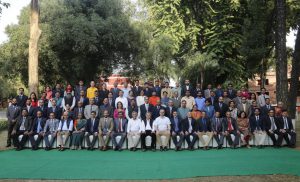