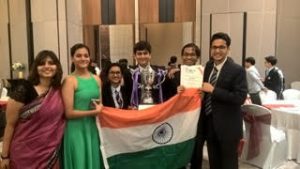 Chaitanya Kediyal (235-T) was the only DOSCO in the team of four (Aniroodh Ravikumar, Tejaswini Krishnaprasad and Amritha Varshini Ragavan) that represented the Indian Schools Debating Society at the 3rd Asia World Schools Debating Championship held at the Anglo Singapore International School in Bangkok, Thailand from the 6th to the 10th of July, 2016. The team was adjudicated the Grand Champions of the Championship after defeating a team from Singapore in the Grand Finals. 30 teams participated in the Championship from ten nations including South Africa, Japan and China.