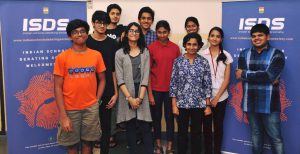 Karan Sampath was selected to the India Development Team 2018 after participating at the national selection camp of the Indian Schools Debating Society. In 2017-18, ISDS conducted regional selection tournaments across 12 regions of the country, in addition to an online process. The top 54 debaters attended the National Selection Camp in Chennai from 7-11 January, where they were exposed to practice debates, quizzes, and topical lectures from trainers in India and abroad. At the end of camp, the top 5 members were selected to form the team that will represent India at the World Schools Debating Championships. In addition, another team of 5 students were selected as the Indian development squad.
The students selected to the development team will go through a rigorous training process. This will include extensive coaching online, where students attend lectures and debates, and submit research tasks, as well as under go face to face training.headed by Chan Sriram, a member of the Indian WSDC 2012 team and coach of the 2017 ICYD team. The team will also be exposed to coaching from other Team India alumni, as well as international coaches.  The students will then be taken by ISDS on a fully sponsored trip to an international tournament.