The School organized an educational expedition to Greece in association with “Operation Wallacea”# a U.K. based biodiversity conservation organisation during the summer vacations.

This trip gave students the opportunity to experience world’s first democracy at Athens through the ruins of Parthenon on the Acropolis as well as join a series of research projects in the eastern Aegean sea. . The first week was based on the island of Samos close to Turkey, whilst the second week was spent travelling south to the more remote island complexes of Lipsi and Arki before returning to Samos for the flight home. The research projects were coordinated by the Archipelagos Institute of Marine Conservation – a Greek NGO with several research bases around the eastern Aegean, with input from the Operation Wallacea university academic teams.

During the two weeks the team completed dive training certified by PADI to dive up to 18m or 60ft, a course on Aegean Island ecology, participated in a combination of camera trapping, acoustic call back and radio-tagging surveys for the golden jackal on Samos to estimate population size , participated in spotlight surveys of chameleons to estimate population size and habitat usage , participated in bird surveys of a saline lagoon area on Samos and a series of remote islands designated as Wildlife Refuges , learnt how to conduct standardized sea grass surveys using snorkel and kayak methods, participated in cetacean and oceanography surveys , assisted with various surveys to assess invertebrate communities, assisted with baseline data collection on a cove in Vroulia Bay in Lipsi Island which will be turned into an open sea aquarium where the original Aegean marine ecology will be recreated. 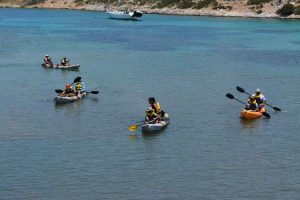 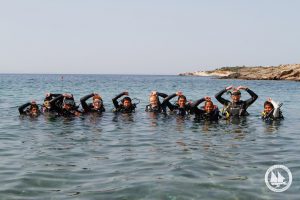