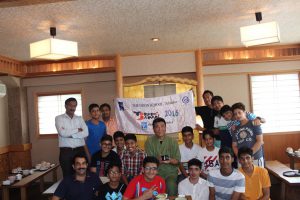 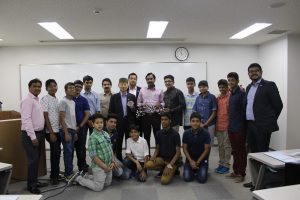 Students visited the Nissan factory and saw their working. Students enjoyed a detailed tour of Tsukuba Space centre (JAXA) and visited the Miraikan science museum where they saw the Asimo Robot and enjoyed the dome theatre show on universe. Students also visited the Waste Management factory in Shinagawa.

Highlights of the trip included experiencing the famous tea ceremony where they learnt how to make, serve and drink green tea; learning to wear the Kimono and learnt the art of origami. They also attended a class on Bonsai making and were lucky to see bonsai plants as old as 1000 years.

Students also met the Nobel Laureate Dr. Satushi Omura who was awarded the Nobel Prize in Physiology / Medicine for his work in Bio Chemistry in 2015. Students had a question answer session with him followed by a visit to his lab where they got to see his work. Dr. Omura presented an autographed photo to the boys.

Students also met the DIET member Mr. Harada Yoshiaki of the Liberal Democratic party of Japan. He is Chairman of the International Relations committee. The boys were able to interact with him on politics and international relations.

Finally students experienced the amazing speed of the Bullet train and got the opportunity to take part in an authentic Japanese repast.