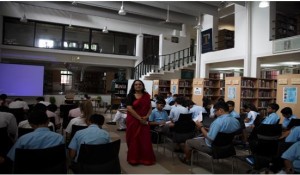 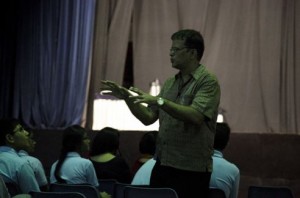 Literary Bhagidari is NHP Centre’s project to mentor young adults. It is first of its kind initiative to bring students from different backgrounds closer to celebrated authors/speakers to create an
interactive and conducive environment in which they are introduced to creative
writing.

The Doon School Library Council Secretary Ananay Sethi welcomed all the guest speakers and introduced the authors to the audiences. The event was addressed by Mr. Sumant Batra, Founder- Kumaon Literary Festival, who stressed upon the importance of reading habits and how his life changed forever due to the  encouragement of his school teacher.

The school was fortunate to have few renowned authors and personalities present on the occasion.

Among them were Jerry Pinto, a writer and translator based in Mumbai, author of the book Em and the Big Hoom (winner of the Hindu Literary Prize and the Crossword Book Award for Fiction) and the non-fiction book Helen: The Life and Times of an H-Bomb (winner of the National Award for the Best Book on Cinema). He also recently won the Yale University’s prestigious Windham-Campbell Prize of $150,000 for his literary achievements.

Last but not least, Fouzia, the first female Dastango (Urdu story teller) of modern times who has performed over seventy shows in the last eight years, was at hand. She performs both traditional and modern dastans as well as those with music and singing, specializing in stories from her birthplace, Old Delhi, and those selected from Urdu literature.

The workshop consisted of two parts mainly-one, a creative writing session with Ms. Abha Iyengar, a British Council Certified creative writing instructor, and second a story telling session with Fouzia. Mr. Jerry Pinto interacted with the students and shared his experiences from being a newspaper journalist to becoming a full-time author.  He gave tips to the students on how to write and express their thoughts into words and encouraged budding authors not to shy away from mistakes. He narrated examples from diverse fields of life in an interactive session with the captive audience.