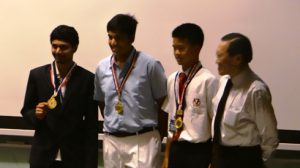 Devansh Mittal from Kashmir House and in B form reports:

‘The first lecture on “The Internet of Things” was great. The NUS event was for pupils aged 13-18.  We were told about how almost everything is connected with internet directly or indirectly. Then we went for a gastronomy workshop which was in a manner of speaking, a cooking class but with the involvement of the science of it. We were divided into teams of four and made jelly from agar-agar powder and juice while the other half of the group made the same kind of jelly with the alginate process. We then had our lunch and continued our adventurous day by learning about an electron microscope its uses and its functioning. We went on to learn how to make a Homopolar Motor using only a magnetic cup, a copper wire, a battery and two extremely strong magnets. We went to a demo lab and learned a lot about static charge, electricity, Wimshurst machine, Faradays cage, super conductor and it magnetic levitation, why some soda cans float while others sink and friction.

The day started with a lecture on forensic science by NG Ngan Kee from the department of biological sciences. We got to know about CSI’s, fingerprints, fingerprint detection, latent blood detection and many other things. Then we remained in the lecture room for a 3D printing workshop. We gained a lot of knowledge on the application of 3D printing, its history, the various materials used in it, ways of 3D printing and it’s sustainability in the future. After an energizing lunch at subway we went to a book store in the spare time, which was followed by our arrival at The National Orchid Garden of Singapore, where there are a lot of varieties of orchids. There are also over 200 hybrids named after famous celebrities, people with an influential government post and Royal Family. Our day came to an end with a visit to Madame Tussaud’s on the Sentosa Island.

We kick started our day with an lecture from Professor Yap Yon Bing on probability where we learned that gambling never pays off however good the odds may seem to you or how lucrative the winnings seem. The Forensic Science workshop was great as it included a case study on OJ Simpson’s case and we were able to prove him guilty of the murder of his ex-wife and her boyfriend by DNA analysis. We had our lunch break and then went onto explore various advancements in technology in the science centre. We also saw a 3D and a 2D show in the science centre. We moved on to see the beautiful city of Singapore by visiting China Town, Merlion and finally the famous Orchid Street which is a highlight for anyone who is a shopping freak.

This, I personally felt was the best day, as we were explained about the uses of nanotechnology by Sow Chorng Haur. He told us about nano-science, nanoscale and how small it is. He also told us that if we cut gold into small pieces it changes color. Telling us about Richard Feynman’s lecture in 1959 “There is a lot of space at the bottom”, he moved onto some future goals for nanotechnology and biotechnology. We then had a Q/A session with the admissions head and he told us about the Universities perks and student life. Then we went on to see the National Museum of History where we saw various animal specimens and also some fossils including dinosaurs and a rock that is considered to be the meteorite that killed the dinosaurs. Then we had a kind of test on what we had seen and were shown 20 specimens and we had to decide based on our recently acquired knowledge what category they fell into. Then we were free do to do whatever we wanted. Some of us went to shop at china town and the rest stayed back to catch up on sleep, rest or pack.

There were groups of 4 and all the members were from different schools. The quiz was held and we were sent for lunch, when we came back we were anxious to know who had won and if it was one of our teams. Then it was announced that there was a tie breaking question for the 1st place between Team 4 (consisting of Devansh Mittal from Doon School) and Team 14. The teams were given a hint by the teacher taking the quiz that the tie breaker was based on the city tour and then the question was flashed, at first it seemed that nobody from both the teams knew the answer but then I, Devansh Mittal, from Team 4 answered the tie breaker question securing first place for my team and a name for our school. Victorious the team of ten boys from The Doon School returned to India.