The expedition was undertaken in the first week of April and on 8th April the boys managed to traverse the pass.This period in the Garhwal Himalayas is infamous for its harsh snow conditions, frequent avalanches and treacherous snow storms. Having traversed the pass successfully, the team became the first recorded expedition to do so in such weather conditions.

The Bandarpoonch Massif has been witness to many mountaineering exploits undertaken by students of The Doon School. Sherpa Tenzing Norgay, the first man on Mt Everest, went so far as to call it the ‘Doon School Mountain’ in his autobiography.
The expedition was organised to commemorate an ex Dosco Major Narendra Dhar Jayal’s 60th Death Anniversary. Major Jayal was a pioneer in Indian Mountaineering, and is credited for being instrumental in establishing mountaineering as a professional sport in India. He was the founding principal of the Himalayan Mountaineering Institute, Darjeeling. He perished in 1958 while on an expedition to Cho Oyu, the sixth highest mountain in the world. 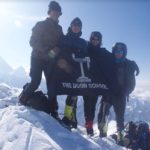 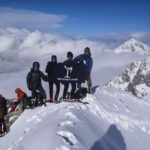