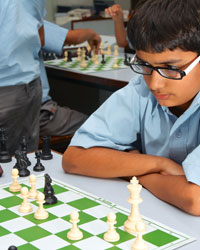 The school team fielded a team and individual players in the Delhi Chess Challenge International FIDE Rating Tournament held between 1st and 5th October 2014 in Delhi.

There were nearly four hundred participants and ten school teams, The Doon School were the runners up in the team event. The team consisted of Sarthak Gupta, Anuman Goel, Atharva Shukla and Amritansh Saraf. Individual success went to a Sarthak Gupta came thirteenth over all and was awarded a cash prize.