The Doon School kicked off its Founders celebrations on 18th October. The day started off with numerous exhibitions taking place; from the modern foreign languages to art to yoga and the design and technology exhibition, with each one displaying their work over the past year and exhibiting some vibrant and enriching displays. This was followed by the annual Holdsworth cricket match between the Old Boys and the present boys with the latter winning the match. Thereafter was the unveiling of the bust of a legendary Doon school master Mr. Sheel Vohra. Mr. Vijay Amritraj the Chief Guest and Mr. Sunil Kant Munjal the Chairman of the Board of The Doon School cut the ribbon. They were accompanied Mr. Munjal’s classmates, the batch of 1973. Later in the evening was the Chandbagh Debate between the Silver Jubilee batch of ‘94 and the current boys. The topic for the debate was ‘ This house believes it is time to reboot our school for a twenty first century India. ‘ The current boys won the debate by sheer dint of debating prowess..In the evening was the English Play, an adaptation of the famous play ‘The Sunshine Boys’, performed by the School Dramatics Society.

The second and final day of the Doon School founders celebrations saw the annual school fete- ‘The Pagal Gymkhana’, put up by Kashmir house. This day long fete was enjoyed by one & all & included games, food stalls & the sale of msny indigenous items from clothes to jewellery & artefacts manufactured in Uttarakhand. This was followed in the evening by the Founder’s Day Speeches given by the Chairman of the Board of Governors Mr.Sunil Kant Munjal who talked about how the school is looking into the future not only in terms of academic excellence but is also thinking about the environment . The Headmaster Mr. Matthew Raggett thanked all the generous donors of the school while the School Captain Nandil Sharma talked about the uniqueness of the school because of the life long emotional bonds that exist between students and between students and teachers. The Chief Guest- Mr Vijay Amritraj drew lessons from his own life to inspire the students, parents and teachers alike.Followed by the speeches was the annual music performance of the students which concluded the night and the event. 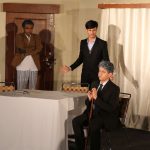 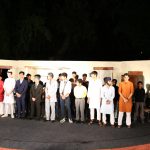 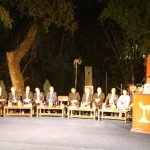 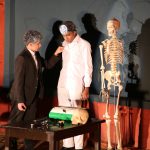