Doon loses to Mayo in the Chuckerbutty Final 2015 This year it witnessed the participation of fifteen schools  from in and out of India and over fifty six debaters. This year, a different approach was adopted  as the world debating format was used. A format which at its core makes the debaters dissect the topic, that does not leave any issue unaddressed, that seeks to cause as many points of contention as it possibly can. 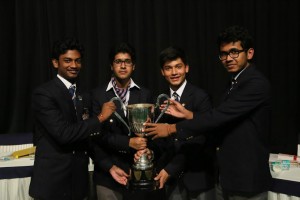