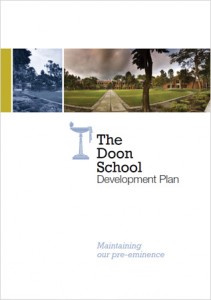 All good schools around the world, along with universities, have implemented and invested in Development and Alumni Relations Offices. They do so in following the best practice in the field, which is supported by professional organizations such as the Council for Advancement and Support of Education (CASE). Universities have traditionally led the way with fundraising, and the US and the UK have been the major leaders in the field of establishing the concept of a development office with its key and official roles being both friend-raising and fundraising for the school or university.

In 2005, The Doon School established the Development Office under the then Chairman of the Fundraising Committee, Mr Analjit Singh, who later became the Chairman of the Board of Governors (2007-12). The Doon School made this decision for the reasons given above and to establish an official and transparent system of fundraising to support the school’s development plans in a cohesive, organized and professional manner. The Development and Alumni Relations Office is the school’s official and authorized fundraising department and its parents and past pupils are fully aware of its existence. This is precisely the best practice model used by our peer group of schools worldwide for many, many years. The purpose of all Development Offices worldwide is to support the institution’s development plans which focus upon implementing the said institution’s mission and vision.

Like almost every prominent and successful school worldwide, the annual fees cover the school’s operating costs but are insufficient to develop the substantial surpluses required for the infrastructure and scholarships. Teaching and teacher development are at the core of any world class institution and this, too, cannot be fully funded through fees alone. In addition, The Doon School is an independent school and does not receive government support. It has been established to be a charitable foundation where surpluses made are ploughed back into the school for re-investment and development. It is not owned and therefore has no access to additional investment aside from traditional financial borrowing as any other organization would do. The Doon School relies on income from school fees, endowments and voluntary contributions from its well-wishers and alumni to pay for scholarships, as well as for its capital projects. Doon is rich in many and varied ways, but its general reserves are, like many schools, not large. Since 2009 much has been done to consolidate the school’s finances, but the investment required to fulfil our ambitions for the boys who study here is very large.

Colleges and schools around the world depend on the generosity of the stakeholders to retain their pre-eminence. Most donations are, in fact, modest, but they are vital as the aggregation of a large number of these can outstrip much bigger donations. Small and regular giving also helps stakeholders connect with School in a meaningful way for the benefit of current and future generations of DOSCOS. Large donations are, of course, always welcome as they help to give a substantial kick-start to any major capital campaign.

We welcome contributions for the development of The Doon School. All payments must be made to “The Indian Public Schools Society”.

The School Fund Raising Committee comprises of the following members: