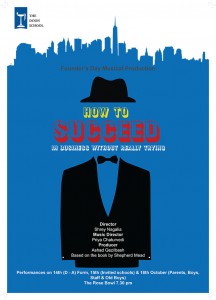 The Senior English Drama STA functions through the year with sessions held with the boys every Thursday. In the Spring Term, the STA organizes the extremely popular Inter-House One-Act Play Competition, held in early May, which involves the participation of over two hundred boys across the houses. The boys are trained in direction, stagecraft and stage design, brochure and costume design, light and sound management and acting to prepare them for the competition. The boys devise the entire show and the competition drives them on. In the spring term, work begins on the production. In the Autumn Term, the STA starts working towards its flagship production, the School Play. Performed in either The Rose Bowl or the Vittal Mallya Hall, the English Play is the most anticipated event at the Founder’s Day.

In recent years, the department has linked with the Music Department to produce a musical. Rehearsals are conducted every day beginning in August, culminating in a performance in October. These plays range from traditional Shakespearean repertoire to modern, award-winning productions like The History Boys, performed in India for the first time by The Doon School. The plays are occasionally performed outside Dehradun, with recent productions having travelled to Mumbai and Delhi. Drama at Doon helps boys develop their inner selves and perform in front of thousands of people, and lends itself to the completion of the education of a true Dosco. The School also has begun to host a performance night for invited schools in Derhadun. This provides the boys with additional performance experience.